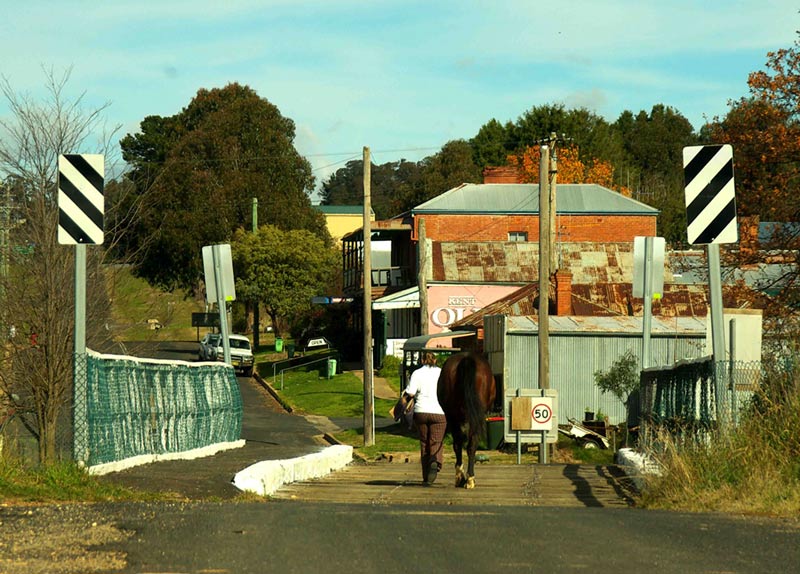 Newbridge was very small but the railway was at the centre and the village wouldn’t have existed only for the railway coming there. As it was very busy centre, all livestock and produce would be brought to the railway for transport to the Sydney markets: wheat, barley, potatoes, peas, turnips, hay, anything marketable . . . was grown locally. That produce was coming from as far away as places from Tuena way . . . as there was no southern railway line. The drovers brought the stock into the railway and other goods came by horse and cart or horse or cattle wagons.

My mother and father conducted the local shop and rural business in Newbridge. My first job was in the store doing all the things like cleaning the whiskers off the potatoes, sweeping out, although my father always employed people and there was always another boy employed. He was a driver, he used to drive the horse and cart of course and then he updated to a motor truck, I think the first truck to be used [in that area].

Most people in Newbridge in my early days didn’t have any work – they were unemployed. It was in the midst of the Depression and any of the people who had work in Newbridge were either rural or railway workers. There were thousands of men employed as railway construction workers when the railway did come through and they had to have food and amenities.

Brian (‘Bede’) Bennett, Newbridge (Back Creek), Interviewed by Susan Chapman for the Villages of the Heart; Telling rural stories 2013.