Carcoar is a little village nestled next to the Belubula River.  It is an historic gem retaining a significant number of early material culture relating to 19th century life.  Carcoar is the third oldest settlement west of the Blue Mountains, and is a wealth of history and a must for all visitors to the Blayney Shire. Although small in population it continues to evolve and has a thriving community and a strong arts and heritage community.

A continuing connection to Aboriginal culture was the name of the river passing through Carcoar. Belubula is identified as Wiradjuri for stony river. George Evens sited evidence of the Wiradjuri presence. The earliest description of the Carcoar locality was in one of Evan’s journals. He noted: Monday, 22nd.

I took a W. 20° S. direction through a fine Grazing Country, most part a thick Forest of various description of good grown timber; at five Miles is a Valley, which bears down West. I perceive it to open in places to about a ¼ of a Mile wide; at 6½ Miles, I cross another leading to it from the South; the Main one bears off N.W.; rounding hills to the West again, where I halted, a strong stream runs down it in wet seasons. A remarkable round top’d high hill is now North of me, about 4 Miles, I have taken the liberty to name it ‘Mt Lachlan’.

Fourteen years later, in 1829 Assistant Government Surveyor Richards as part of the dividing up the countries put aside a village reserve called Carcuan.  The actual ‘birth’ of Carcoar is inextricably linked to Thomas Icely and Coombing Park.  Icely had two large titles of land, one he purchcased Stoke and the other a land grant Coombing Park.  Thomas Icely took up his grant on Coombing Creek in 1831.  He employed 62 convicts to build Coombing Park.  At this time Icely was already wealthy.

On July 13, 1863, members of Ben Hall’s gang held up the Commercial Bank but their efforts were thwarted and the gang fled without seizing anything.

Carcoar is easily accessible with the busy Mid Western Highway passing right by.

Carcoar is classified by the National Trust.

The third oldest settlement west of the Blue Mountains, Carcoar has a wealth of history for visitors to discover. A walking tour of the village brings alive the town’s colourful history and its architecture.

Further visitor information can be obtained from the Enterprise Store in Belubula Street. 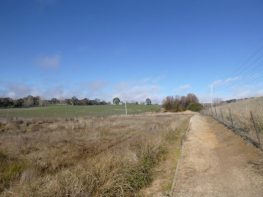