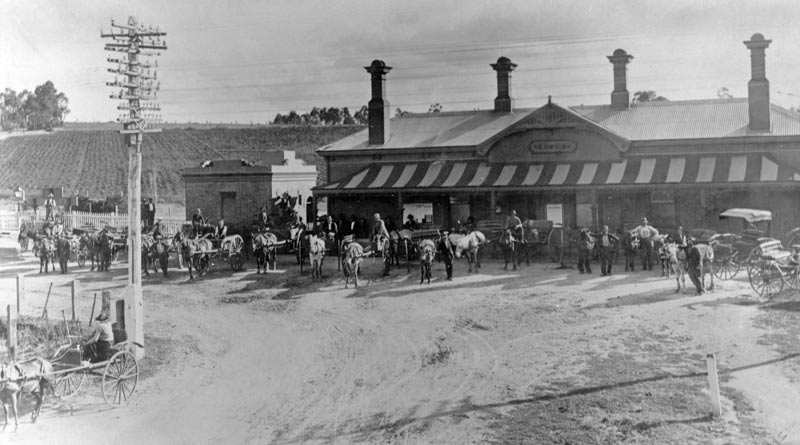 My grandfather, Arthur Amos, used to trade in eggs and sell them to the markets. There were lots of farming people in this district who used to bring their eggs to my grandfather who used to pack them up in big wooden crates and take them to the Millthorpe railway station. Some of the eggs would go to Orange and other crates would then go to Sydney, to the Sydney markets.

He lived in a small house on the Forest Road, not far from beneath the railway subway. I think that was his main income until he moved up town. There was a little vacant shop in Victoria Street and, having had a lot of experience in the menswear and mercery trade, he started to sell clothing and overcoats and boots as well as continuing to collect eggs.

This shop used to have a verandah out across the footpath. He ran the place like most shops in the early 1900s. He went from that to selling everything. He started a drapery. He started footwear. He already had men’s clothing. And then went into produce and opened the grocery. So you could buy nearly anything you needed.

When my Dad he reached third year of Orange High School, grandfather wanted him to come home and work in the shop. So my Dad started there and worked with Grandfather for several years until he was married.

There were two main entrances. The one that was right on the corner, when you walked in that entrance way you walked through all the hardware and cooking utensils and hardware. Then you would come to the grocery, a big long counter. That was on the Victoria Street side of the building. Coming in the other entrance on the Pym Street side, that was when you walked into the menswear, the footwear and the haberdashery and the mercery.

When we were kids at school we used to get jobs like wrapping up the butter. That was always a great job. The butter used to come in a box of 45 pounds. Whenever you sold a pound of butter you always wrapped it up in paper. We used to use Women’s Weekly: the sheets were a perfect size to wrap a pound of butter in.

Those days there was nothing prepacked. Everything had to be weighed. The sugar was in 60 pound calico bags. We pre-weighed all our sugar.

Back in the early days it was all counter service and home deliveries. We covered the entire district door to door: grocery counter to the kitchen bench.

I used to collect the orders. You’d sharpen your pencil and get on your bike with your docket-book and take off and collect the orders and when I’d get back with the orders, write them up and price the dockets, we had all the goods together and put them in a box. And in the afternoon the delivery driver would deliver them.

In the 60s we were trading at our best. It was in the early seventies, I suppose, that things were starting to progressively die off, particularly in the electrical trade because the bigger centres were opening in Orange and selling for much cheaper than we could and I think from the early seventies the whole trade started to decline.