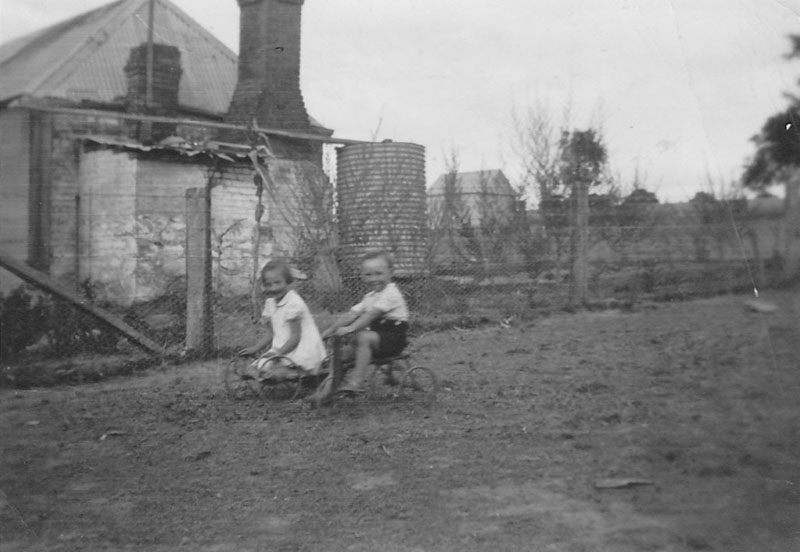 Image Caption: Ann and Greg with the kitchen and chimney in the background

Mum had it hard, as did all women in those days with no facilities, candles and kerosene lights, right up to the late 1940’s.

We then got a 32 volt wind driven generator on a 40ft tower, which charged batteries to give us electricity. This was a great step forward and Mum even got an electric Mixmaster.

Dad purchased a kerosene Electrolux refrigerator in about 1949. Up till then all we had was an old drip safe, one where you filled a tray at the top with water and it soaked down over the sides of the safe on hessian that lay in the water in the top tray, came down the sides and fell into a tray at the bottom. You had to keep emptying the bottom tray and keep the top tray full. We also had a meat room in what was known as the pantry; just a gauzed-off room with a gauze door. All the food that had to be kept away from flies went in there as well as the milk, cream, butter, separator, etc.

We used to kill a sheep once a fortnight and nothing much was wasted as we kept the liver, heart, brains, kidneys, jaws, tongue and cawl fat. The fat would get melted down for dripping and for making soap. The first day we would have lamb’s fry for breakfast and we would eat the tongue, brains, jaw and heart. Mum would sometimes keep the kidneys for a stew. The front half of the sheep would be put in a bucket and boiled in salt water until almost cooked. Mum then put the bucket in the meat room, put a plate on top of the meat and placed a brick on it to keep the meat under the water. When it cooled it would have a layer of fat set on the top that would seal the contents. We put the hind quarters of the sheep, cut into sections, into the drip safe and we would eat all fresh meat the first week and then out would come the salt meat for the second week. Then it was time to kill another sheep!

All through my school days I milked two, sometimes three, cows every morning and strained the milk for the family’s use that day. I then separated the remainder and fed the separated milk to the pigs. Mum would make butter from some of the cream nearly every day. We ate butter and cream and drank milk like it was going out of fashion. Fresh milk was a regular drink for me, sometimes up to the equivalent of three litres a day.

One old brindle cow we had lost her calf one year and I milked her morning and night. She gave eight gallons of milk a day and Mum would make a pound of butter every day from the cream, as well as using as much cream as we wanted. Normally we only milked once a day, letting the calves run with the cows through the day and shutting them up at night.

The old house was built around 1875 and had the kitchen separate from the rest of the house. The kitchen was a big room with a brick oven in one end, which I never saw being used. I was told the old people (Dad’s parents) used to light a fire in it and get the oven hot then scrape the ash and coals out and put the bread, cakes, etc. in the oven. The heat of the bricks would do the cooking. Next to it in the same end of the kitchen was a huge fireplace that would measure two metres wide by one and a half metres high which the old people put big logs into and used as an open fire. In my time Mum didn’t use the brick oven because she had a cast iron Metters Beacon Light stove in one half of the fireplace. The other side was used as an open fireplace and had a fountain hanging on a steel arm that could be swung over the fire or out off the fire.