The concept of the Amoco Hall was first mentioned at a meeting at the Ophir Hotel  when Mr Ernest Tilston ‘sold’ the idea of a public hall to the then Deputy Mayor, Alderman Ron Hill.

The meeting was to discuss the formation of a Bowling Club for proposed bowling greens that the Amoco Oil Company had agreed to help finance in exchange for the lease of  land  on Bathurst Road on which their service station was built. Alderman Hill promised to solicit the support of the Mayor, Alderman Clive Hamer and if Orange City Council agreed to a public hall instead of a bowling green an approach would be made to the directors of the Amoco Oil Company to devote their lease money to the construction of the building.

The Hall was opened on 10 June 1965. On the opening night in there was a hugely uccessful ball complete with live dance band (the Merry Makers). The next evening Stomp City.  Three bands – Buddy and the Hermits, the Mystery Men and the Ravens  performed half hour stints in turn to keep the dancers happy from 12 noon to 12 midnight. None of the musicians accepted pay that weekend, and neither did the hall staff – the entire proceeds were ploughed back into hall improvements.

Concerts have been given there by the Easybeats, the Auntie Jack Show, the Sydney Symphony Orchestra, Billy Thorpe and the Aztecs, Ray Brown and the Whispers, Jimmy Barnes, and many others. Orange’s biggest bash ever, the welcome to Queen Elizabeth and Prince Phillip in April 1970, was held in Amoco Hall.

Orange City Council took over the management of the Amoco Hall in late 1990 and the venue was named the Orange Function Centre.

ABC reporter Melanie Pearce uncovered this about the infamous hall during its 50th birthday http://ab.co/1TapshL 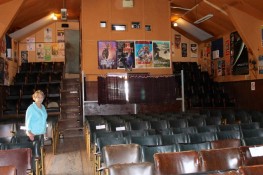