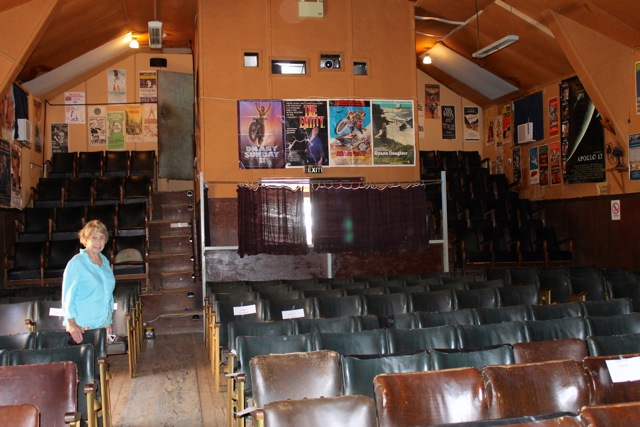 We were the envy of most of the school kids. Course we would be at the Amusu Theatre every Saturday Night.

After Dad saw the talking machine in Sydney, he came home and changed his silent biography machine to the talking machine. It was something for people, out back too, in those little country towns, they had nothing else, they all looked forward to when the talkies came to town.

In the Depression, this was their

entertainment. That’s really how Dad made his money. They had to eat and they wanted to be entertained. That’s what Dad always said anyhow. They used to come miles to some of the shows out there. Then they started to screen in halls and places that had halls.

We had my grandfather living with us after my grandmother died. They lived next door to where Dad built the house and after Nanna died my grandfather came and lived with us. He was there all the time and a good disciplinarian too, he kept an eye on us, he was wonderful.

Jeff and I took over the 16mm plant for 12 months or more. We used to sleep in the halls there in the supper room, put up a shower, one of those showers with the nozzle on it and shower there. We would get ready for the show. You would meet lovely people out west. We often got invited for meals, and the places. We enjoyed it and after that when that folded we went to Dad, he had the theatre at Millthorpe,

People did their courting in some of those little towns. A lot met their partners in the theatre. The theatre had love seats, they are pretty popular! They had no arms in between; you could cuddle up, in the dark.

The Amusu was built in 1936 and it went strong for a long time, until the advent of television. That’s when it all went to pieces for a while, but it did come back later on, but it wasn’t near as good once the television came.

The projectionist was Len Townsend, I was always on the door, I sold tickets, or I was the usherette, my sisters all helped. We were there every Saturday night we were the envy of most of the school kids. Course we would be.

I loved Shirley Temple, and Deanna Durbin movies and musicals Gone with the Wind. Dad never sat through all of that, he didn’t like it, he said it was too bloody long. Dad would be next door in the office doing something, while that was going on, having a yarn. He might have even gone down to the pub too.

I remember watching a movie at the Amusu and flames came on the screen. We looked around and the projectionist had gone to sleep. There was smoke billowing out