It’s Carcoar that stole my heart quite early on. I find it a special place.

It’s Carcoar that stole my heart quite early on. As a child I had connections with Carcoar and I find it a special place.

I have a special fondness for the river and the little creeks that run into the river. It’s changed a bit since I came here. They built a dam on the Belubula River and that’s changed the flow of the river into Carcoar, and it’s just such a lovely natural setting, so unspoiled – you’d have to fall in love with it.

The hospital has just so much history – wonderful stories that cover the span from the early settlers – the gold seekers and the bushrangers – and it’s just so great to research the story and to be able to picture where exactly that took place.

The hospital building itself is unique and probably one of Australia’s earliest Colonial hospitals still intact, built in 1861 and hand-poured glass still in the windows, hand forged nails on the floor, handmade bricks. And it offered employment for women. It was a career path for women back in the eighteen hundreds when women didn’t work away from home as a rule. A lot of them got an early taste for nursing then were able, when training for nurses started, to train and serve.

In the Boer War and First World War there were Carcoar women who had trained through their connections with the hospital.

The hospital was the axis of the other villages around. Where villages like Lyndhurst and Mandurama and Barry and Neville had their own churches and schools and halls, there was only one hospital and they all worked together for it. So it became a social hub as well as an employment hub, and one couldn’t have existed without the other. Those villages needed a hospital and the hospital needed those villages, and it was really admirable the way those other villages supported Carcoar and its hospital.

Carcoar was the first town beyond Bathurst and people set out from here to settle the west of the State. It’s important for the children of today that they know how the country came to be what it is and how the Australian spirit was developed.

A preservation order that was put in place by the National Trust in 1974 has preserved the village as it was then. It was a little bit late because a few important buildings had been demolished, but that’s probably what brought about the preservation order in the first place. It’s a tribute to the pioneers, the early settlers, and it’s important that their work be recognised and their families recognised as the forebears of the current residents in many places. 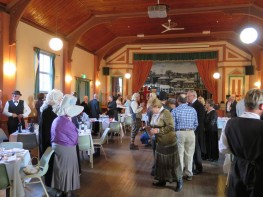