On 17 February 1864, Andrew Barton Paterson was born at the home of
his aunt and uncle, Rose and John Templer at Narrambla, near Orange.

It is assumed that the homestead of Rose and John Templer was
built between 1847 and 1848. Surprisingly little is known about
the homestead other than it is said to have been made of cobble
stone with walls about two feet thick, although it is more likely to
have been a weatherboard cottage as described by Leslie Oakes who
apparently visited Narrambla in the early 1870s.

“The house, built of weatherboard, was a miniature station home, low
and squat-looking – not many rooms, but very wide verandahs, back
and front, with, I think, small rooms at each end of the back verandah.
Several English trees were flourishing at the rear of the house, but its
most notable feature was the front flower garden. This had evidently
been planned by an Englishman, for the beds contained all the old
English high-scented flowers that our ancestors loved. Moss roses
predominated, with wallflowers stocks, lilacs, lavender and other highly
perfumed flowers, bordered by violets. The wide front verandah was
literally smothered with jasmine, honeysuckle and climbing roses.”

Not far from the homestead John Templer operated a flour mill known
as the Narrambla Steam Mill from 1848 to 1869 – the building was not
referred to as Templer’s Mill until much later. The homestead and flour
mill once stood in the vicinity of the obelisk located at Banjo Paterson
Park, five kilometres northeast of Orange on the Ophir Road. The mill
was somewhat grander than the homestead as it was a three-storey
brick building on bluestone foundations with ornamental lintels and
sandstone sills – some of the sandstone sills were reused in 1947 as
the base of the Paterson Monument on the Ophir Road. The brick
chimney was built out from the southwest corner of the mill, adjacent
to the boiler and beam-engine.

Narrambla Steam Mill finally closed in 1869 when the Templers moved
to New Zealand. In 1870 the mill building was converted into a
shearing-shed, and a wool-press was still in the building in 1935. The
homestead was occupied by several owners and tenants until 1895
when it may have burnt down, as did so many weatherboard houses.

Unfortunately the remains of the mill had to be demolished in 1971 for
safety reasons. Much of the original building, including the roof and
second floor, were missing and it was considered beyond restoration.

Today there is little remaining of the three-story building other than
a pile of bricks and a pillar and plaque to mark the site of the mill in
Banjo Paterson Park. A brick feature wall exists in the foyer of the
Orange Civic Theatre from bricks salvaged from the old mill.

On 20 December 1947 Banjo’s wife Mrs Alice Paterson unveiled a
monument to the great poet before a crowd of 400 people. 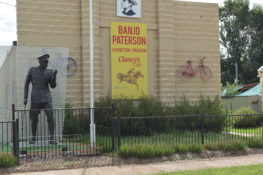 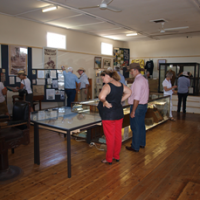