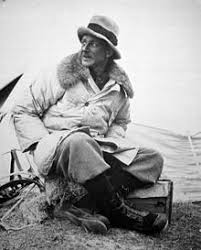 An international pioneer of modern mountain climbing techniques, George Ingle Finch was born near Orange on 4 August 1888. George went to school at Wolaroi College in Orange. The family moved to Europe in 1901, when George was aged 14.

A trained scientist, Finch developed the use of oxygen cylinders to be used climbing high altitude, low-oxygen mountain peaks. It was an approach that was criticised by traditional climbers.

As a member of the second British expedition under General Charles Bruce to climb Mount Everest on 23 May, 1922, Finch and Captain Geoﬀrey Bruce reached an elevation of 8,321 metres. This height set an altitude world record that wasn’t beaten for 29 years when Edmund Hillary reached Everest’s peak.

Finch also wore a bright green jacket of his own design made from hot air balloon fabric and ﬁlled with eiderdown feathers, the forerunner of the ‘puﬀer-jacket’ clothing that is now standard for high altitude climbing.

Finch later became Professor of Applied Physical Chemistry at London’s Imperial College and in 1944 he received the Hughes Medal, given by the Royal Society of London “in recognition of an original discovery in the physical sciences, particularly electricity and magnetism or their applications.” Other winners of the medal included telephone inventor Alexander Graham Bell (1913) and world famous astrophysicist Stephen Hawking (1976).

His son was the academy-award winning actor Peter Finch.