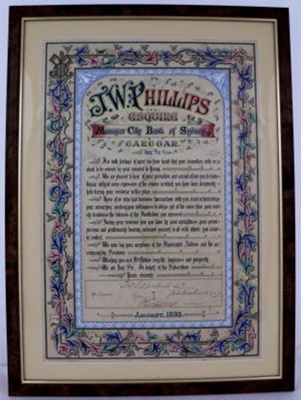 About this objectThis illuminated address figures in one of the most unhappy events to have occurred in Carcoar. The address was presented to Mr John William Phillips, the manager of the Carcoar branch of the City Bank of Sydney, together with a silver epergne, by the Carcoar community on the occasion of his promotion to the position of branch manager at Young. The address expresses the community’s admiration for Mr Phillips’ professional and gentlemanly conduct, and wishes Mr and Mrs Anne Phillips ‘long life, happiness and prosperity’. Tragically, Mr Phillips’ household was the victim of a bungled burglary on the night prior to Mr Phillips’ departure for Young, with Mr Phillips and a guest, Miss Frances Lotitia Cavanagh, murdered, and Mrs Phillips injured.
The illuminated address presented to Mr Phillips indicates the esteem in which he was held by the Carcoar community. Mr Phillips, previously of the Cobargo district, had worked at Carcoar for approximately one year prior to his death. Respected as a man of ‘unvarying courtesy’, ‘willingness to oblige’, ‘uprightness’, ‘genial presence’, and ‘gentlemanly bearing’, Mr Phillips’ imminent departure to Young was seen as Carcoar’s loss. Newspaper articles subsequent to his death reinforce this impression, with The Brisbane Courier reporting that he was ‘held in the highest esteem’ and had won his promotion to Young ‘on solid merit’ (The Brisbane Courier 26 September 1893: 5).
Described as an example of ‘the lower type of bloodthirsty criminality’ (The Brisbane Courier 26 September 1893: 5), a ‘dreadful tragedy’ (The Brisbane Courier 25 September 1893: 5; The West Australian 26 September 1893: 3) and the ‘Carcoar tragedy’ (The West Australian 2 November 1893: 2; The Brisbane Courier 30 November 1893), the incident, which occurred on 25 September 1893, was immediately reported across the colonies. By the 26th of September, the name of a suspect - a local Carcoar man, Mr Herbert ‘Bertie’ Edward Glasson - was reported along with news of his arrest. Mr Glasson was accused and convicted of attempting to rob the City Bank in order to pay his increasing debts and of murdering, with a tomahawk, Mr Phillips and Miss Cavanagh during the attempted burglary. Evidence tendered against Mr Glasson included the eyewitness testimony of Mrs Phillips, the correspondence between wounds on Mr Glasson’s body and blood stains on clothing found abandoned near Cowra, and the theft from Carcoar (and subsequent discovery at Cowra) of Rev. F.W. Clarke’s horse. Questions about Mr Glasson’s sanity were raised during the inquest (The Brisbane Courier 26 September 1893: 5; The Brisbane Courier 27 September 1893: 5; The West Australian 2 November 1893: 2), with Glasson eventually declared sane (The West Australian 9 November 1893: 3). Glasson himself maintained his innocence throughout, even until his execution on 20 November 1893 (The Brisbane Courier 30 November 1893: 6).
The history of this illuminated address is well-documented by CDHS records. Retained by Anne along with the silver epergne, the address was handed down to the Phillips’ daughter, Gladys, and eventually to Gladys’ daughter Lenore. Lenore and her father, Erle Goodwin, presented the address to CDHS on 27 July 1991 bringing it, as the attached press release put it, ‘full circle’. The newspaper articles of late September 1893 suggest that the initial inquest was held at Carcoar Court House, whilst the trial was conducted at Bathurst Circuit Court.
Significance
This illuminated address derives historical significance from its association with J.W. Phillips, the victim of an horrific crime at Carcoar. The poignancy of this association is heightened by the fact that it was presented as a farewell gift to Mr Phillips only days before his murder. An attractive and representative example of the illuminated address, this item is in excellent condition. Whilst the framing is relatively recent, the address itself is in its original condition and has retained its colour well. The association between this address and the timing of Mr Phillips death gives this example of the illuminated address tradition a certain uniqueness. The Phillips address is a well-provenanced and documented artefact that remains a unique piece of New South Wales’ criminal justice history.
Kim Tuovinen 2010